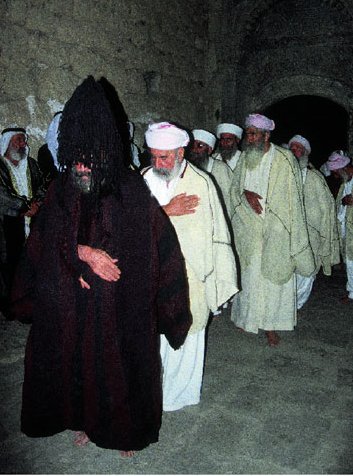 Sheikh Adî is a Sufi reformer who lived among the Yezidis in the 12th century and reformed their culture and religion into the shape it is today. He is venerated as a divine being who resides in the same heaven as Tawsi Melek, although many believe that he was an incarnation of the Peacock Angel. One clue to proving this notion is that when Sheikh Adi was in physical form so were the spirits of the six other Great Angels. Thus, many believe that at that time he embodied the First Great Angel, Tawsi Melek, in order to guide the other six. Another clue that Sheik Adi was indeed Tawsi Melek in a physical form are some qoutes attributed to him – qoutes that only Tawsi Melek himself would have made. For example, he is believed to have once stated: “I was present when Adam was living in Paradise, and also when Nimrod threw Abraham in fire.  I was present when God said to me: You are the ruler and Lord of the Earth.  God, the compassionate, gave me seven earths and the throne of heaven.”

At another time Sheikh Adi proclaimed himself the bearer of the Truth (haqq) and the creator of everything by the will of God. He then refers to himself as the highest God:

“I am ‘Adi, ash-Shami, [son of] Musafir …
In the depth of my knowledge there is no God but me.
These things are subservient to my power.”

Sheikh Adî  ibn Mustafa is said to be of Umayyad Muslim descent and spent many years among the Sufi adepts in Baghdad after moving from his native home in the Beka’a Valley of Lebanon.  Sheikh Adi eventually settled in the valley of Lalişh (some thirty-six miles north-east of Mosul) in the early 12th century AD. after a series of visions instructed him to travel north and help save the Yezidis.

Sheikh Adi created the Yezidi caste system of Murid (commoner), Pir, and Sheikh. Most of the leaders of the Yezidis are of the Sheikh caste. Sheikh Adi, who was himself a Sufi Faqir, also established the Yezidi order of Faqirs. Today during the Yezidis’ Autumn Festival in October, the Faqirs observe a ritual dance behind a leader who wears garments once worn by Sheikh Adi himself (see picture above).

So important is Sheikh Adi to the Yezidis that they mention him often in their prayers and rituals – sometimes elevating him the position of Tawsi Melek. For example, in the Prayer and Confession of the Yezidi Religion, the Yezidi name of the Sheikh is mentioned four times: “Bread is from Shaikh ‘Adi’s storehouse”; “Sheikh ‘Adi sits on the throne”; “My religion is [from] Sharf ad-Din” (a part of Sheikh Adi’s  complete name); and “Shaikh ‘Adi is the One God”.

After Sheikh Adî died he was entombed in Lalish, the most holy shrine of the Yezidis. Today, Yezidi pilgrims from around Iraq and other parts of the world come to Lalish to visit the Sheikh’s tomb and receive his blessings.