Yezidis and Hindus: Re-Uniting as One People

There are many similarities between the Hindus and Yezidis. In fact, it has been suggested that in very ancient times they may have even been one people. Recent comparisons and historical research between the two people have revealed so many links that now thousands of Hindus and Yezidis believe that they are part of the same family.

Historically, the Yezidi timeline states that following a huge flood in Mesopotamia that occurred in approximately 4000 BCE, many Yezidis migrated east, west and south to India, Afghanistan, Morocco and the other nothern African countries. They remained with their adopted countries for two thousand years, or until around 2000 BCE, and then many Yezidis returned to their native land and helped found the historical civilizations of Babylonia and Assyria. Those Yezidis who remained in India continued their absorption into Hindu culture although over the following four thousand years many Yezidi families slowly returned to their ancestral land. 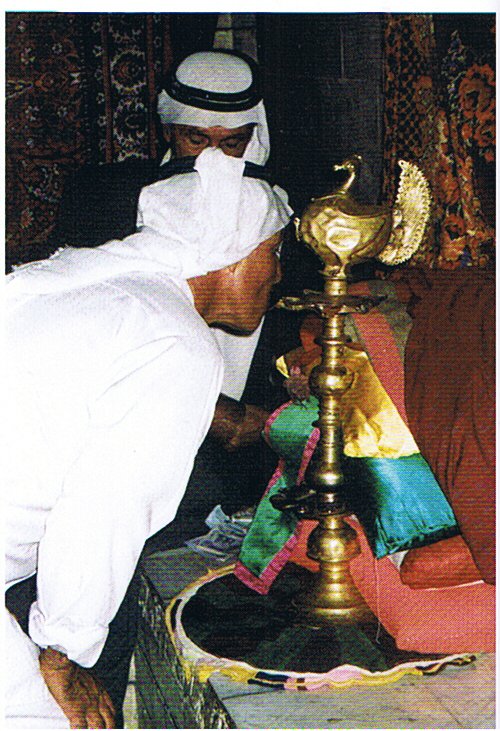 One of the most striking similarities between the Hindus and Yezidis can be found between their respective oil lamps, which the Yezidis refer to as Sanjaks and the Hindus refer to as Aarti Lamps. The image of a peacock surmounts both. But while the Hindus have thousands of Aarti Lamps in use the Yezidis possess only two Sanjaks. Their deity, Tawsi Melek, the Peacock Angel anciently gave the Yezidis Seven Sanjaks, one for each Great Angel, but five have either been lost or stolen since. The two remaining are so sacred that they are only brought out once a year for the Yezidi people to pay homage to.

The link between Hindus and Yezidis is implicit at the Yezidis most sacred temple shrine of Lalish. Painted on a temple wall is the mural of a woman wearing a Hindu sari while holding a Sanjak/Aarti Lamp

The Hindu Peacock-riding Murugan and the Yezidi Peacock Angel

The peacock astride the Aarti and Sanjak oil lamps is related to a deity that can be found in both the Hindu and Yezidi pantheon. In the Hindu tradition this deity is the peacock-riding Murugan, and among the Yezidis it is Tawsi Melek, the Peacock Angel or Peacock King. A comparison of these deities reveal them to be counterparts of each other. Both have the peacock in common, of course, and each deity has at one time or another been envisioned as a boy with peacock feathers growing out his tail end. They both brought the Path to God to Earth and taught it to humanity, and both have been associated with groups of seven. Murugan as Sanat Kumara is often spoken of as the leader of the Seven Kumaras, and the Peacock Angel is known as the leader of the Seven Great Angels. And both deities have also been ascribed the nature of a Trickster.  Here are more associations:

Murugan is associated with the Sun and he carries a Solar Flag with a cock, symbol of the Sun, upon it. The Peacock Angel is an emanation of the Supreme Solar Being and the Solar Disc underlies his iconic image.

Murugan is the Green Man. The Muslims know him  as al-Khadir, the “Green Man.” The Peacock Angel is also the Green Man. Legends state that in very ancient times he wrapped his etheric plumes around the Earth and they crystallized as all the forms of nature.

Both Hindus and Yezidis share a belief in human reincarnation and transmigration.

Both Hindus and Yezidis are blessed by their holy persons at the sacred space between the eybrows. They also anoint themselves at this “Third Eye” region.