What is the Peacock Angel?

Tawsi Melek, the “Peacock Angel” and “Peacock King,” is the most import deity of the Yezidis. But he is not the possession of the Yezidis solely, he belongs to the entire world. The Yezidis believe that they possess the oldest religion on Earth, the primeval faith that features Tawsi Melek, and that all other traditions are related to them through the Peacock Angel. They contend that Tawsi Melek is the true creator and ruler of the universe, and therefore a part of all religious traditions. Once he arrived on Earth he became its monarch and has since governed the world from an etheric dimension. The image below shows Tawsi Melek landing upon the Earth. 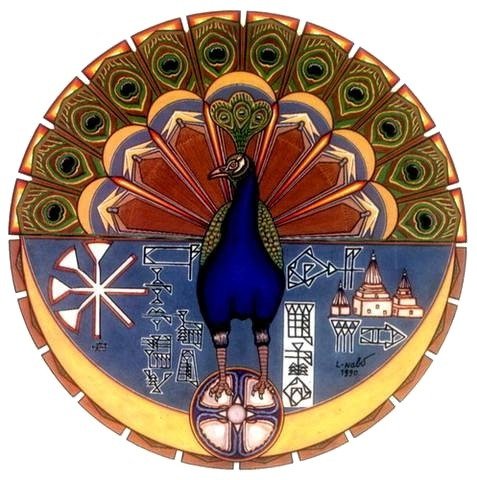 In the Garden of Eden Tawsi Melek made his influence felt among all the races and their descendants destined to populate the Earth. He taught Adam and Eve, the parents of the pre-destined 72 tribes of Earth people, the secrets of worship and human evolution. Later, each of the 72 tribes took his image and teachings with them to their new homes. Once there, however, the form and name of Tawsi Melek changed even though his attributes and character remained the same. Today, you can find that most of the ancient cultures allude to an ancient Savior in their creation myths who once blessed them with teachings related to human enlightenment and immortality. He was both Savior and King of the World. He is their version of Tawsi Melek.

The Yezidis do not believe that the Peacock Angel is the Supreme God. The Supreme God created him as an emanation at the beginning of time. He was brought into manifestation in order to give the invisible, transcendental Supreme God a vehicle with which to create and administer the universe. Tawsi Melek is thus a tangible, denser form of the infinite Supreme God. In order to assist Tawsi Melek in this important role, the Supreme Creator also created six other Great Angels, who were, like the Peacock Angel, emanations of the Supreme God and not separate from him. When recounting the creation of all Seven Great Angels, the Yezidis often summarize the emanation process as follows:

Tawsi Melek was the first to emerge from the Light of God in the form of a seven color rainbow, which is a form he still today continues to manifest to them (usually as a rainbow around the Sun). But the Yezidis also claim that Tawsi Melek and the six Great Angels are collectively the seven colors of the rainbow. Therefore, the six Great Angels were originally part of Tawsi Melek, the primal rainbow emanation, but they separated from each other to become the Seven Great Angels. Of the seven colors produced from the primal rainbow, Tawsi Melek became associated with the color blue, because this is the first color. It is the color of the heavens, from which is the colors emanate.

Tawsi Melek was, therefore, both the first form of the Supreme God and one of the Seven Great Angels, which is a cosmic heptad mentioned within many religious traditions. The Jews, Christians, Persian, Egyptians all have their seven angels and creators. In the Meshefê Re, the Yezidis “Black Book,” there is one passage that describes the Seven Great Angels and associates their creation with the seven days of Creation. The text first states that the Supreme God first created a pearl containing the substance or substratum of the soon-to-be physical universe, ostensibly referring to the molten mass of the “Big Bang” championed by modern physics. The Yezidi text then maintains that for forty thousand years this pearl sat upon a primal bird, which is quite possibly an incipient form of Tawsi Melek before he divided into the Seven Great Angels. This pearl then exploded (or became dismantled) to become the physical universe. Then, states the Meshefê Re, came the seven days of creation:

Ever since their primal creation the Seven Great Angels have been associated with the day of the week they were created. Tawsi Melek’s day is Sunday, etc.

Once the Seven Great Angels were created the Earth was produced by them out of the substratum of the original pearl. It remained barren and then suddenly entered a phase of intense continual shaking, perhaps coinciding with the violent earthquake and volcanic activity that was ubiquitous around the young Earth. In order to calm the planetary quaking, the Supreme God sent the Peacock Angel to Earth with orders to both sedate the Earth and endow it with multi-colored flora and fauna. As Tawsi Melek descended into the physical dimension his seven-colored rainbow self became manifest as a magnificent bird of seven colors, the peacock. He then flew around the globe in order to bless every part of it, finally landing in the area of what is now Lalish, the Yezidis most sacred part of Earth located in northern Iraq. Here Tawsi Melek was able to calm the Earth while simultaneously covering it with his peacock colors.

With the Earth in a more placid phase of its evolution the Great Angels proceeded to their next creation, Adam. The first human was created by all the Seven Great Angels, each of whom endowed him with a physical sense to experience life. One gave him an ear, one a nose, one a mouth, etc. But the first human was a lifeless heap of flesh without a soul, so Tawsi Melek transmitted the breath of life into him. When Adam then rose to his feet, Tawsi Melek quickly swung him around so that he was facing the Sun while informing him that there was something much greater than he and that praying daily to the Sun as a form of the Supreme God would help him to remember this truth. Tawsi Melek then verbalized the prayers that Adam and his descendants around the globe were to repeat during their worship, and he spoke to them in 72 languages since Adam and Eve were destined to have 72 sons and 72 daughters who would populate the 72 regions or countries of the Earth. The Peacock Angel then informed Adam that if he and his descendants remained steadfast in righteousness they would eventually see and know the Supreme God personally. In the meantime, Tawsi Melek would be their protector and teacher even while residing in another dimension.

More about the Peacock Angel