More about the Peacock Angel 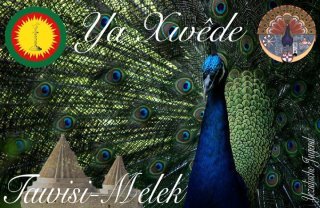 Future Prophecy of the Peacock Angel

Yezidi prophecy maintains that Tawsi Melek will come back to Earth as a peacock or rainbow during a time of intense conflict, poverty, famine and distress on the Earth. He will then transmit some prayers to a holy man, probably a Faqir, who will then take them around the Earth and give them to representatives of all religions.

The Yezidis believe that Tawsi Melek is in every place on the Earth and in the universe in every moment. So his “return” could simply allude to a time when humanity becomes aware of this truth again. He is, therefore, always available for support and protection to anyone who sincerely calls upon him. His greatest worshippers, the Yezidis, call upon his assistance to help meet all their needs.

To those who call upon him with great devotion, Tawsi Melek may manifest in a variety forms, including a bright light, a rainbow, a boy, a young man, a snake, and, of course, a peacock. He also will appear on occasion so his worshipers can remain secure regarding his existence. One of his most recent appearances occurred following a skirmish between the Yezidis and Turkish Muslims, when Tawsi Melek decided to appear to not to a Yezidi but to one of the Muslim Turks so that there would be no doubt about his existence. During this appearance, Tawsi Melek “bid the bewildered man to go and tell the people that a big war was brewing, but that no harm would come on the heads of his people, the Yezidis, who would emerge from the conflagration unscathed.”

Although he is the eternal ruler of Earth, during the Yezidis New Year Tawsi Melek designates one of the six Great Angels to represent him as ruler for the coming year, so there is always guidance and protection coming from all the Seven Great Angels.

Is the Peacock Angel the Devil?

The Peacock Angel has been falsely accused of being Satan or the Devil for hundreds of years by Muslim theologians. It appears that this distortion regarding Tawsi Melek may have been generated by an Islamic defamation crusade against the Yezidis, initiated by the Muslim view that the Yezidis are not “People of the Book,” meaning that there is no revealed scripture at the center of their religion. In truth, Meshefê Re, the Yezidis “Black Book,” was written when Tawsi Melek first came to Earth and existed down to the time of a series of wars with the Turkish Muslims, when most of it was lost. The book was very thick with a black color, and embossed with red and gold.

The Muslims’ slanderous misunderstanding of Tawsi Melek appears to have gained momentum when certain Muslim leaders took some characteristics of the Peacock Angel and related them to their conception of Satan. For example, Tawsi Melek is recognized by the Yesidis to be king of the entire universe and King of the World, an epithet that both Muslims and Christians have ascribed Lucifer over many centuries. Muslims also point to the legend that states that Tawsi Melek refused to bow to Adam in the Garden of Eden even after being instructed by God to do so. His disobedience is the hallmark of Satan. But according to the Yezidis, who claim to know the legend in its original form, God instructed all the Seven Great Angels not to bow to anything or anyone other than Him. Thus, when God commanded the Angels to bow to Adam it was a test, and only Tawsi Melek passed the test by not bowing to the first man.

Here is a list of allegations against Tawsi Melek that have been part of the Moslems’ attempt to convince the world of his Satanic nature:

Truth: The alternate name for Tawsi Melek they refer to is not Azazel, but Aziz, a name meaning “something precious.”

Truth: The Yezidis honor the goat because, like the Hindus’ cow, it sacrifices itself and supplies many of their needs. It gives them milk, wool, etc.

Truth: In the Yezidi tradition it is indeed stated that the Peacock Angel was present in the Garden of Eden. He failed to bow down to Adam because he was obeying God. The Yezidis claim that previous to the creation of Adam the Supreme God had informed all Seven Great Angels never bow down to any other entity other than Him.

Truth: The Caliph Yezid was a Muslim who became disenchanted with the Islamic teachings and converted to Yezidism. The name Yezidi has existed since the Yezidi people were first created.

In addition to the above, Muslim could have easily been mislead by the inaccurate anecdotes and propaganda regarding the Peacock Angel, some of which have been fabricated by other Moslems. A rumored Yezidi “Origin Myth,” for example, that alludes to a Yezidi shepherd finding an injured Peacock Angel in the form of a physical peacock and calling itself “the Spirit of Evil thrown out of heaven” is completely spurious and not associated with any authentic Yezidi texts or teachings.

The Peacock Angel in other Religions